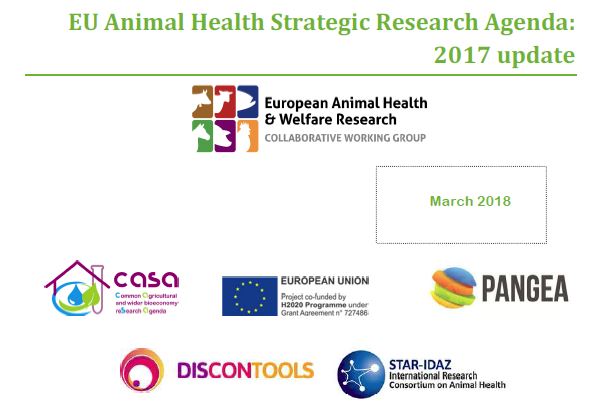 Europe’s veterinary public health systems are confronted with growing political, economic, sociological, technological and environmental changes and challenges. A priority-focused strategy is urgently needed to best utilize the limited resources invested into animal health research for safeguarding and improving animal health for present and future generations. A foresight study was carried out as part of […]

A new report mapping current initiatives in the fields of the IRC priority topics has just been published by the Secretariat to the IRC. Initiatives in this case refer to existing research networks/alliances which enables research teams to successfully work together and facilitate communication/collaboration/sharing reagents and resources. The aim was to gather and compile documents […]

Survival of ASFV and other viral pathogens in feed

Researchers have found that African swine fever virus (ASFV) could survive in a simulated Trans-Atlantic feed shipment. The study, published in PLOS ONE, evaluated the survival of ASFV and other important viral pathogens of livestock in animal feed ingredients imported into the United States under simulated transboundary conditions. The viruses were selected based on global […]

The STAR-IDAZ IRC newsletter can be downloaded here: click on Read Full Story:

The first newsletter from VetBioNet is now available  and the newsletter can be downloaded here. VetBioNet is the  EU-funded ‘Veterinary Biocontained facility Network for excellence in animal infectiology research and experimentation’, an infrastructure project to establish a comprehensive network of  high-containment (BSL3) research facilities, academic institutes, international organisations and industry partners. More information on VetBioNet can […]

FMDV protein could be used for disease detection

Dr Stephen Berryman and Dr Toby Tuthill from The Pirbright Institute have collaborated with the MRC Laboratory of Molecular Biology and other research institutes to uncover a system used by foot-and-mouth disease virus (FMDV) to prevent antiviral signalling of infected cells. The discovery could allow scientists to detect animals that have been infected with FMDV […]

DISCONTOOLS, the open-access database identifying research gaps to improve the control and management of more than 50 infectious diseases in animals – has just launched a new website with updated info for a majority of the prioritised diseases: www.discontools.eu An important resource for public and private funders of animal health research, DISCONTOOLS aims to help speed […]

Characterization of Mycobacterium bovis in Mozambique

The most extensive study to date of the genetic diversity of Mycobacterium bovis isolates from Mozambique is reported in PLOS Neglected Tropical Diseases. Bovine tuberculosis (BTB) is of global concern for multiple reasons – the economic impact on animal production, the potential spread to wildlife, and the risk of transmission to humans. While BTB is […]

One Health study of tick-borne diseases in Mongolia

To better understand the epidemiology of tick-borne disease in Mongolia, a comprehensive seroprevalence study was conducted investigating exposure to Anaplasma spp. and spotted fever group (SFG) Rickettsia spp. in nomadic herders and their livestock across three provinces from 2014 to 2015. Dr. Michael von Fricken spent a year living in Ulaanbataar as a postdoc with […]

The Roadmap for Zoonotic Tuberculosis was launched at the 48th Union World Conference on Lung Health, which took place in Guadalajara, Mexico, 11-14 October 2017. Four partners in health, the World Health Organization (WHO), the World Organisation for Animal Health (OIE), the Food and Agriculture Organization of the United Nations (FAO) and the International Union […]