Building on STAR-IDAZ, an International Research Consortium (IRC) of research funders and programme owners, aiming to maximise funding for coordinated animal health research, with a higher level of commitment was launched at an event hosted by the European Commission in Brussels on 27 January 2016. Documents relating to the STAR-IDAZ IRC can be found here.

The overall objective of the STAR-IDAZ IRC is to coordinate research at the international level to contribute to new and improved animal health strategies for at least 30 priority diseases/infections/issues.

The deliverables include:
• candidate vaccines, and/or
• diagnostics, and/or
• therapeutics and other animal health products, and/or
• procedures and/or
• key scientific information/tools to support risk analysis and disease control

The STAR-IDAZ IRC will be governed through an Executive Committee, a Scientific Committee and a variable number of working groups all supported by a secretariat (SIRCAH), the mandates of which can be viewed here. The organisational structure is illustrated below: 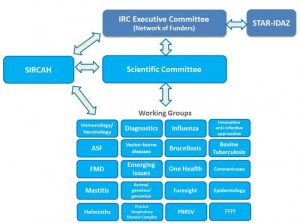 Partners who have joined, to date, the IRC include:

To join the STAR-IDAZ IRC Executive Committee, the programme owner/funding body, whether a member of STAR-IDAZ or not, should commit a minimum of $10 million USD over 5 years for future funding of research projects/programmes contributing towards STAR-IDAZ IRC objectives. If your organisation is unable to commit this level of funding alone it is possible to form a group, usually regional, and join that way. For further information please contact the STAR-IDAZ Coordinator Dr Alex Morrow alex.morrow@defra.gov.uk .

The IRC Executive Committee is composed of one representative per funding body (including public funding bodies, charities and the animal health industry), or group of funders, OIE, the Chair of the Scientific Committee and the STAR-IDAZ Chairperson.
These individuals are nominated and appointed according to the following principals:

• Groups of STAR-IDAZ Programme Owners/Funding bodies
Programme owners or funding organizations that would like to contribute to STAR-IDAZ IRC, but who cannot reach the minimum required investment for membership (such as public funders from a group of smaller countries in particular regions of the world) and/or provide funding for only a single priority disease/issue or a subgroup of priority diseases/issues, may form a group of funders that together reach the threshold for membership (i.e., $10 million US over a 5-year period). Each such group of funders can nominate one representative to the Executive Committee. Other configurations of group funders are also eligible.

• Agrees and adopts STAR-IDAZ IRC Governance, Policies and Guidelines, including decisions on the creation or closure of Working Groups
• Coordinates research funding strategies to address identified research priorities such as those identified by the Scientific Committee
• Advocacy – promotes support for STAR-IDAZ IRC objectives from the livestock and animal health industries and services and the wider donor community.
• Monitors progress and provides updates to funding bodies.
• Reviews nominations and accepts new members to the Scientific Committee
• Agrees on a Communication Strategy that ensures timely and correct dissemination regarding STAR-IDAZ IRC objectives and progress made
• Provides a forum for the resolution of any conflicts, should they arise.
Members of the Executive Committee may participate in meetings of any Working Group.

The Scientific Committee is composed of approximately 15 members with a balanced expertise and representation from academia, livestock and animal health industry, and risk assessment and regulatory bodies.

Scientific Committee members are appointed by the Executive Committee from a list of candidates nominated by:

Current Member of the Scientific Committee:

• Map and report on major ongoing national, regional or international initiatives in its field of interest to maximize worldwide awareness of these projects.
• Point out the problems and difficulties in the scope of the WG that ultimately prevent or delay the development of new diagnostics, vaccines/therapies and/or key information/tools for risk analysis and disease control strategies (gap analysis)
• Recommend prioritised research objectives, actions or solutions to resolve gaps, problems and difficulties in the scope of the WG
• Cooperate to ensure synergies of all research projects within the scientific area of the working group, by exchanging results, expertise, experiences and information
• Agree on good research practice to be adopted (e.g. standard operational procedures, performance indicators) for animal health research
• Promote scientific excellence and enabling environment, including human resource development and capacity building
• Liaise with other working groups as appropriate
• Adopt and report back on the implementation of STAR-IDAZ IRC policies and guidelines in animal health research projects and propose changes where necessary
• Report to the Scientific Committee at least twice a year
• Working groups may organise in collaboration with the IRC secretariat, scientific conferences in their domain

Secretariat for the International Research Consortium on Animal Health (SIRCAH)

The mandate of the IRC secretariat is to provide organisational and communication support to STAR-IDAZ IRC and its various members and thereby contribute to the IRC policies and guidelines aimed at coordinating research at international level to contribute to new and improved animal health strategies. The Secretariat also plays an important role in advovacy for the consortium and bringing in new members.

It supports the work of the STAR-IDAZ IRC by:

To contact us, please enter as many details as possible below and we’ll get back to you ASAP!